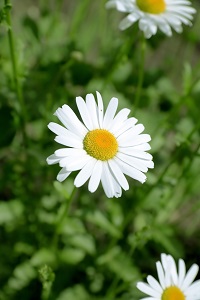 Roman chamomile is used since Antiquity for the formulation of many pharmaceutical preparations, and traditional medicines used to consider it as a precious drug. The plant was, in particular, cultivated a lot in Roma, which explains the origin of its common name. In Greek, its botanical name means “land” and “apple”, in reference to its apple fruity smell, emerging when someone walks over it. Indeed, the plant likes to grow in the middle of roads, close to the ground, which makes her a lot trampled.

Coming from Europe, roman chamomile leaves in a wild state in mild region and likes siliceous soils. This perennial plant, low and aromatic, can reach 20 to 40 centimeters high. Its hairy stems have ramifications, and its alternate leaves are skinny. The small flowers, white with a yellow heart, are erected lonely at the end of the stem. They have a sweet and warm fragrance, and blossom from June to September.

Nowadays, chamomile is used for its antispasmodic, digestive and anti-inflammatory virtues. It also has a relaxing role on the nervous system, and allows helping sleeping. In cosmetic, roman chamomile is mostly used for its soothing effect, due to its high concentration in flavonoids. Moreover, its flowers have protective, repairing, purifying and astringent properties.