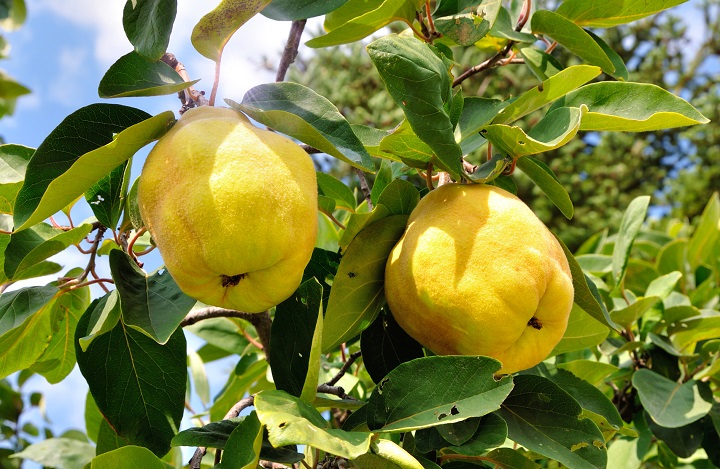 Harvested for more than 4000 years, quince tree is orginating from Caucasus and Iran. The origin of its botanical name comes from ancient Greece, where its fruit was already consumed and called “Cydon’s apple”, in reference to Cydon, the city of Crete where the fruit is mostly produced. Quince was also dedicated to Venus, goddess of beauty. Symbolizing love, it was supposed to bring happiness and fertility to newlyweds.

Low growing-shrub from 5 to 8 meters high, quince tree likes temperate climate. Its peak is round and its winding trunk owns bark scales. Its simple alternate leaves are green with a white silvery back. Its solitary flowers, white-pinky colored, appear during spring and are composed by 5 distinct petals. It then moves to fruits with large and smelly seeds. Called quince, their skin is green and fluffy before maturity, and becomes golden yellow while ripening. Their pulp can be eaten but is astringent; and that’s why it’s better to cook it to eat it, as jellies or marmalade.

Quince tree is used for a long time in medicine for its digestive virtues, astringent and tonic. In cosmetic, the plant is used for its soothing properties and to sooth rashes, thanks to its phenolic compounds such as glycosylated flavonoids.