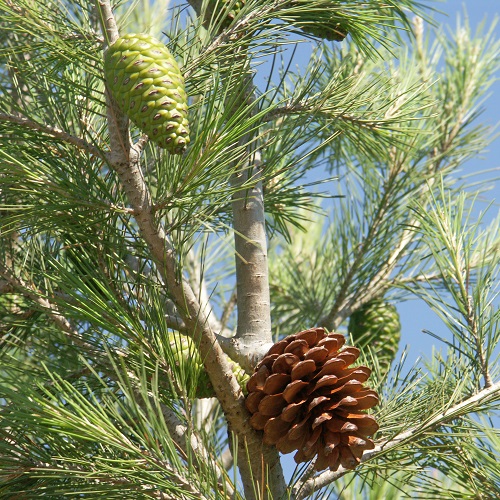 Originating from Mediterranean basin, maritime pine is nowadays present on the Atlantic littoral (Landes), in Mediterranean region (Corsica, Portugal, Spain) and in Algeria. In France, the tree is used since the 19th century on Les Landes, to fix sand and stabilize dunes. It’s a kind of reforestation of Les Landes (approximately 1 100 000 hectares) considered as one of the biggest one cultivated in Europe.

Maritime pine is a conifer from 20 to 40 meters high, appreciating acids and poor soils, and full exposition to sun. Its bark is pale grey for young trees and red purplish with deep cracks for the elderly ones. Young trees have regular and conic shape. With time, they shed from the base and the peak becomes irregular, flat and smeared. Leaves, in the form of needles, are lasting and dark green colored. Fruit is a long shiny slender cone, dark reddish-brown at maturity. Blossom happens from April to May. Male flowers are yellowish and ovoid, while female flowers are brownish and conic, both at the end of branches.

Rough and lowly alterable wood of maritime pine is used in the construction industry (frame, floor, panel, cladding, carpentry, etc.) but also for the paper fabrication. Needles and green cones are the raw material for extraction of essential oil, rich in terpenic compounds, and known for its antiseptic virtues, bactericide and antirheumatic. Bark is used in the industry for the extraction of polyphenols, specifically procyanidolic oligomers, having many biological properties useful for human health (anti-inflammatory action, prevention of venous disorders). In cosmetics, polyphenols help to protect skin against oxidative stress and have a global action on cutaneous aging effects.