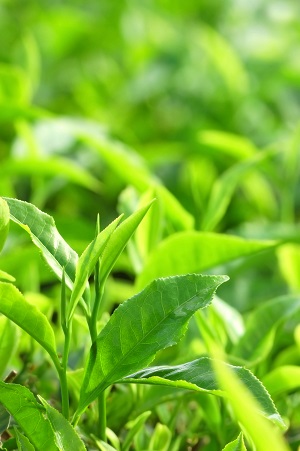 According to a Chinese legend, discovering of tea goes up to 2737 before Jesus-Christ. While the Emperor Chen Nung was heating water under a shrub, leaves felt into the water where they infused. The Emperor tasted this drink and found it delicious. Native from Far-East, tea bush is cultivated for millennia for its leave which, infused, are used for tea preparation. Different sort of tea (green tea, black tea, white tea,…) are coming from the same tea bush but depend on the drying process and the leaves’ fermentation. Moreover, leaves of bush tea are part of the Chinese traditional medicine and were applied as a paste to relieve rheumatism.

Tea bush is a shrub which can reach from 10 to 15 meters high, but often kept at 1.5 meters for its culture. It grows in tropical and humid region, on acid soils. It has evergreen, alternate, oval leaves, long from 4 to 15 centimeters, on 2 to 7 centimeters large. They are bright, dark green, relatively tough with a thick texture. Flowers are white to yellow, and measure between 2.5 to 4 centimeters in diameter. They are lonely or clustered in 3 to 4, at the axil of the leaves. Fruit are caps from 1.5 to 3 centimeters of diameter. They are composed by 1 to 4 lodges, each of one composed by 1 to 2 seeds. At maturity, fruit valves open and liberate seeds which fall down.

Non fermented leaves of tea shrub are listed in the pharmacopeia and used in phototherapy to treat stoutness, tiredness or water retention. Richness in active polyphenols in their leaves bring them interesting properties in cosmetic. Indeed, specifically catechine which give them their high antioxidant property, allowing fighting against free radicals inducted by UV. Moreover, they have an anti-aging and moisturizing action, and helps to keep the elastic network of the skin.