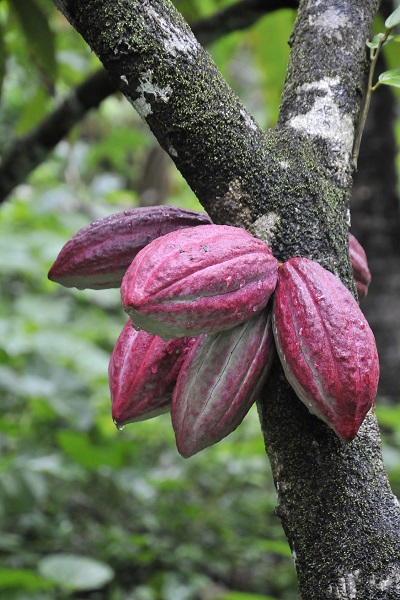 Cocoa trea is a tree from Central America and South America, where it enjoys tropical climate. He was already cultivated by Mayas and Aztecs, which were considering it as the tree of Gods, hence his botanical name Theobroma, meaning “the food of Gods”. Those populations were eating the beans of this tree as a drink called “tchocolati”, known for its nourishing and fortifying virtues.

Cocoa tree is a plant which can grow between 10 to 15 meters high, particularly fragile and cannot support direct light. It needs to grow by the shadow of other trees, called mothers of cocoa. Its white flowers appear directly on branches and trunks. They are many, but only 1 out of 500 will become a fruit. The fruit, called cocoa pod, is a large elongated berry, measuring between 15 to 20 centimeters, and whose color vary from light green to dark red, according to the degree of maturity. The fruit is composed by many seeds (up to 60), gathered in ear and called cocoa beans. Fresh beans are not smelly and very astringent. When they mature, they are surrounded by a white pulp called mucilage, which is at the origin of fermentation necessary for cocoa fabrication and to the organoleptic specifications of chocolate.

Cocoa bean is very rich in lipids (around 50%) but also contains alkaloids (theobromine and caffeine) as well as phenolic compounds (monomers and oligomers catechin). This polyphenols has antioxidant properties, helpful for health. Those are in particular flavanols, contributing to protect from the oxidative stress, and maintain suppleness and skin elasticity.