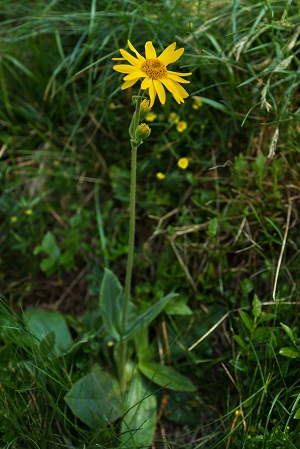 Native from Mexico, where it widely grows in the wild, arnica Mexicana is one of the plants the most used in the world, mostly used by the Mexican population. This plant, very close to its cousin known in Europe under the name of arnica montana, is well known for its efficiency against bruises.

Arnica Mexicana is a herbaceous plant, with a height going from 20 to 30cm, appreciating a warm and dry climate. It has one to two pairs of downer leaves, at the base of it, forming a rosette. At the center of it looms a hairy stem, supporting at its end 1 to 3 solitary flowers, orange-yellowish and forming large heads from 5 to 6cm large. It blooms during summer and releases a delicate suave smell. Fruits are composed by yellowish achenes, topped by silky hair.

Arnica Mexicana is known in traditional medicine for its anti-inflammatory and analgesic effects. In cosmetic, flowers bring regenerative, soothing and antioxidant properties, due to their high concentration in flavonoids.